Twitter “We’re Not a Newsroom” – So what are they?

by Thomas B. Cross @techtionary 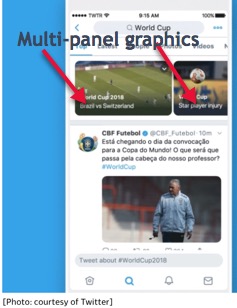 According to Fast Company “Throughout this decade, Twitter has been a uniquely powerful way to keep up with the world’s news on a moment-by-moment basis. But that’s not the same thing as saying it’s beeneasyto use it for this purpose. It’s required careful management of your timeline, a willingness to traverse hashtags, and a familiarity with the service’s search features. The more effort you put into all this, the more news you got out.”  Here is a little more but click on image for complete article and some animations to help you understand what this hoopla is all about.

“Now Twitter wants to take a more active hand in packaging up breaking news and ongoing events for consumption on its service. Via a combination of human curation and algorithms, it will collect together tweets, videos, and other elements about specific news events; fill your app with news about subjects it thinks you’re likely to care about; and attempt to ensure that you see the most important stories even if you’re not rummaging around for them.” 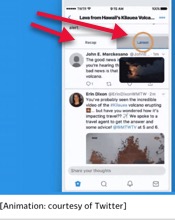 At Twitter’s media briefing, the company was light on the details of how it will ensure that its news upgrade won’t be hijacked for nefarious purposes, other than stressing that it involves a “blended” combination of humans and software. “We’re not a newsroom,” said director of curation Joanna Geary. “We’re not going to say ‘I wonder what the biggest issue is today, we’re going to commission something.’ We’re there to reflect conversations already going on on the platform.” Twitter doesn’t disclose how many employees it has on its curation team, but Geary did throw out a few stats: The company is curating news in 16 markets and five languages, with staffers in offices in eight cities.”
To figure out what Twitter is all about requires more than just saying they are “curating content” and they are not a “newsroom.”
Bottom-line – When I ask people about Twitter aside from those disgusted with Mr. Trump’s Tweet Storms, they really have no idea what it is, much less what Twitter is good for. Most want to know how to real ROI if they use Twitter for their business. Personally most think they also see Twitter not as a newsroom but a bar room for news trolls, bots, hacks, nasty people and others including Trump who don’t really have any news just opinions or worse on what is happening or what they think is happening but really don’t know what is happening.  Alas, a skeptical fan of Twitter I wonder myself but alas keep on tweeting like the old saying “keep on truckin.”
Tags: newsfeed, newsroom, twitter